British author Bernardine Evaristo poses with her book Girl, Woman, Other. She would later win the 2019 Booker Prize for Fiction, an honor she shared with Margaret Atwood. Tolga Akmen/AFP via Getty Images hide caption 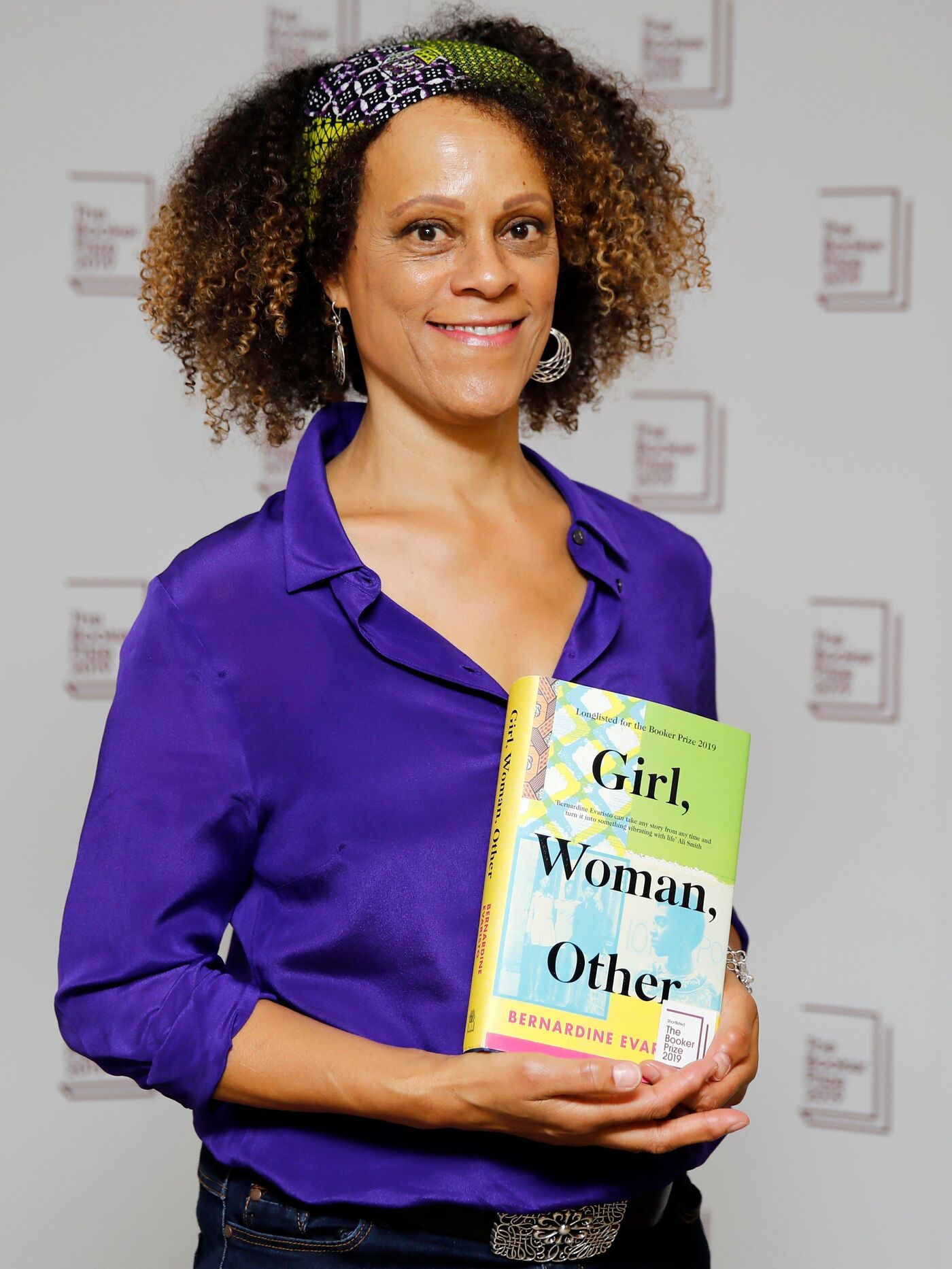 British author Bernardine Evaristo poses with her book Girl, Woman, Other. She would later win the 2019 Booker Prize for Fiction, an honor she shared with Margaret Atwood.

Bernardine Evaristo’s novel Girl, Woman, Other is just being published in the United States — after being awarded the U.K.’s Booker Prize last month (an honor shared with Margaret Atwood‘s The Testaments).

It follows 12 people, mostly women aged 19-93, whose lives are somewhat interwoven. They’re often introduced with hyphens: There’s Amma, a socialist-lesbian-playwright; and Megan/Morgan, who is nonbinary; and Winsome, an Anglo-Barbadian immigrant and unhappy wife. They’re all black, British and different.

Evaristo, who is Anglo-Nigerian, spoke from London about her book, the diversity of black Britons and sharing the Booker Prize.

“I was very happy to share the Booker because I still won the Booker,” Evaristo says. “I know that some people had issues with it, but I didn’t. It’s such a hard prize to win — you know, it’s been going 50 years. … And if I was going to share it with somebody, who better than Margaret Atwood?”

On the characters in Girl, Woman, Other

And the book opens with Amma, who is a black, lesbian theater director, and she has a show opening at the National Theatre in London. She has spent nearly 40 years working in theater as a director and writer, and very much on the margins, feeling overlooked, very radical in her politics. Suddenly she’s got this big break … and then the story kind of goes off into all these other stories, and at the end of the novel, we see the show opening and the gathering together of lots of characters in the book.

On seeking to put “presence into absence”

So there are very few black British novels getting published — that’s the truth of it … and people might be able to mention one or two names, but they won’t be able to go much further than that. So there aren’t many of our stories out there, and there are various reasons for this. So when I decided to write this novel, I wanted to put as many black British women into it as possible — to show the heterogeneity of who we are in this society, and to explore us as fully realized, complex, driven, flawed individuals whose stories are worthy of telling as anyone else’s.

On the character Yazz, who is the playwright Amma’s daughter

One of the things that I do with the book is that there are four mother-daughter relationships, and that is always very fertile territory for fiction. So yes, Yazz is 19, she comes from a very black middle-class family. She is actually quite an entitled young woman. She’s very ambitious — you know, she says that she wants to be a journalist with her own column because it’s about time the whole world heard what she had to say.

And I think that when young people are coming into themselves and coming of age, often they do disparage the person who gave birth to them, or their parents. Her mother is a feminist and she raised Yazz to be a strong, feminist daughter. She describes her as her countercultural experiment. But of course, that backfires, because her daughter is very articulate and takes aim at her mother all the time. And for example, her daughter is engaged with issues of gender and nonbinary issues and so on. And she says to her mother: Look, mum, being a woman is so passe. She says: I’m a humanist; that’s who I am now.

On winning the Booker Prize for her eighth book, much as her character Amma has a breakthrough after decades

Who knew that this [novel] would break through in the way it has? In a sense, I think it could have only have broken through at this time, because I think we’re living in a time in the U.K. where there are a couple of movements or moments which have slightly, I think, changed people’s perceptions of who we are in this society. One of them is the #MeToo movement and the other is Black Lives Matter. And they came about, I think, three or four years ago. And since then, there has been this shift in consciousness in terms of how black art and black women’s art is being received in this country. …

And definitely winning the Booker has opened my work up to the world at large. And that has been the most incredible thing. I’m still pinching myself, really, because it’s only been just over 3 weeks. And every so often, I get into a bit of a mood and I think, hmm, start feeling snarly, and I think … You won the Booker! Shut up! You won the Booker! You have no reason to be disgruntled about anything anymore, because your work is out there. And I started in the early ’80s, so we’re talking about a very long time of not being known to the wider world. So I appreciate every moment.

I think it’s important to name us according to how we experience the world. So we — black women for example, black people are — we are experiencing the world as people who are racialized, right. We are experiencing the world as people who are considered female, or if our sexuality is homosexual, whatever. So I think it’s important for us to name the thing that we do. So I’m not at all squeamish, actually, about identifying myself as a black British woman writer, and identifying this book as about black British women (primarily, because most of them are) because that’s what I’m doing. I take inspiration from Toni Morrison who, many years ago, would say: Yeah, I’m an African American women writer, and that’s the perspective from which I write, and there is nothing limiting about that. … Being black British is being as diverse as any other demographic in society.

And just to say: White male writers, for example, I would say most of them are writing from that perspective, and often with white male protagonists. They don’t need to label themselves as such because they are the accepted norm. They are the default, right. I’m not the default. What I’m doing is different. What we’re doing, women of color, is different. And I think it’s very important to identify that for ourselves — and for the reader.

Denise Guerra and Melissa Gray produced and edited this interview for broadcast. Patrick Jarenwattananon adapted it for the Web.